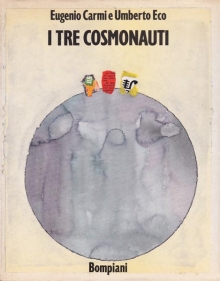 At the Frankfurt Book Fair in 1988, a German publisher asked Umberto Eco if he could republish the fairy tales of 1966; this was followed by similar requests from many other publishers, including the Italian Bompiani. This edition of 1988 was very successful: the two books were translated into many different languages and adopted by primary schools. For this second edition, Eugenio Carmi decided to redo all the illustrations, which he regarded as being dated. ‘So he completely redid them: in the same spirit, but adapted to the taste of the times, his and that of the others. In my opinion, they are much better…. I would like to point out, however, that the spirit of collage and the taste for abstraction, with just a few figurative touches, have remained unchanged…’. ’in Umberto Eco and D. Macmillan, Carmi, Edizioni l’Agrifoglio, Milan, 1996.

Some of the illustrations by Carmi.