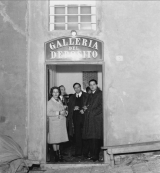 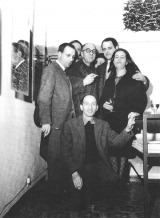 Installation of an exhibition at the Galleria del Deposito. Eugenio Carmi and Brano Horvat. 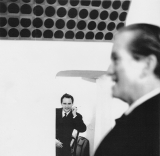 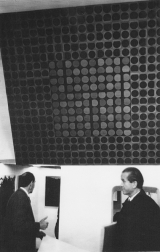 Private view of an exhibition at the Galleria del Deposito. Kiky Vices Vinci is wearing one of her pieces of jewellery that Max Bill described as ‘small sculptures’. 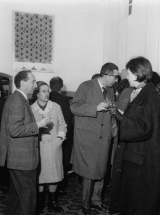 Private view of the exhibition of lithographs on tin plate by Eugenio Carmi at the Galleria del Deposito. With Kiky Vices Vinci and Gian Lupo Osti.

A fisherman, Nanni, with one of the scarves produced for Edizioni Galleria del Deposito 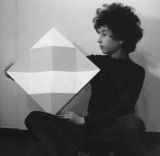 Francesca Carmi with a multiple. 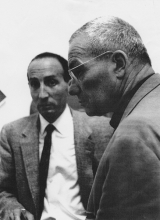 Private view of an exhibition of works by Max Bill (right). 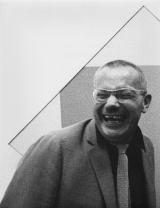 Max Bill at the private view of his exhibition at the Galleria del Deposito, 1964. Photo Lisetta Carmi.

A meeting of the members. From the left, Beringheli, Horvat, Carmi and Fedeli. Residents of Boccadasse in front of the Galleria del Deposito.

Eugenio Carmi with César while he prepares an Expansion, 1969. 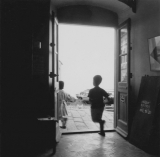 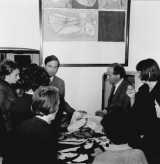 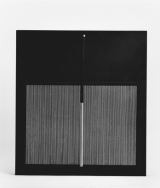 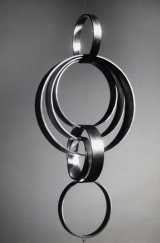 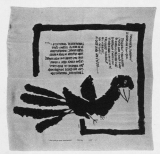 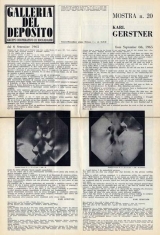 In 2003 the Museo di Villa Croce in Genoa staged a large exhibition devoted to the activity of the Galleria del Deposito and the artists involved. In the photograph, the room devoted to works by Kiky Vices Vinci: multiples, jewellery and one-offs.

Two exhibitions have been devoted to the Galleria del Deposito in recent years. In 2006 at the Museo d'Arte Contemporanea Villa Croce in Genoa, curated by the museum’s director, Sandra Solimano (read texts by Gillo Dorfles, Arnaldo Pomodoro, Lucio Del Pezzo and Carlo Fedeli). In 2010 at the Italian Cultural Institute in Los Angeles.

It was Eugenio Carmi’s idea to found a cooperative known as the Galleria del Deposito, and he immediately involved three of his friends: Carlo (Popi) Fedeli, Emanuele Luzzati e Flavio Costantini. ‘We must do something new,’ he said, adding that it should be done right there, in Boccadasse, a fishing village on the edge of Genoa where he lived with his family and where he had his studio.
‘Something new’ could be regarded as one of Carmi’s slogans of that period, a phrase reflecting both the approach that was also characteristic of him later and the enthusiastic revolutionary spirit of the age. It was intended to offer an alternative to the commercial logic of the art market and create an artistic and cultural centre with international breadth. The aim, was in other words, to create and spread forms of art accessible to a much wider public than before: it would certainly be an exaggeration to speak of ‘art for the masses’, but it was certainly no longer produced exclusively for traditional collectors. Luzzati, Costantini and, above all, the journalist Carlo Fedeli — with whom Carmi shared his experience at Italsider — immediately embraced the proposal. They decided that the group should be a cooperative, that it should be a self-financing, non-profit organization, without any external financial support. On 3 September 1963 the Gruppo Cooperativo di Boccadasse was founded. In the meantime, other exponents of the world of culture and the visual arts joined: the founding members were the artists Flavio Costantini, Achille Perilli and Kiky Vices Vinci, the set designer and artist Emanuele Luzzati, the critic Bruno Alfieri, the graphic artist and designer Germano Facetti, the photographer Kurt Blum and, subsequently, the gallery owner Paolo Minetti (as director of the gallery) and numerous other artists and intellectuals. On 23 November of the same year the cooperative opened the Galleria del Deposito — its name deriving from the fact that it was located in a former coal depot — which faced directly onto the beach where the fishermen’s boats were pulled up. The first public event at the gallery was a group exhibition entitled ‘Sedici quadri in blu’ (Sixteen Blue Paintings), curated by Gillo Dorfles (who had also become a member of the cooperative). The artists participating belonged to different tendencies and, next to rigorous abstract works, there was even a picture by Marc Chagall. The intention was not, in fact, to create a new artistic movement, but rather — and this was another of the distinguishing features of the gallery — to offer a variety of approaches linked by emotional affinities that reflected the work of contemporary artists, often avant-garde ones. From the world of industry, Carmi derived the democratic imperative to spread the concept of beauty in society and focus attention on the relationship between art and technology. In fact, in addition to its monthly exhibitions, the Galleria del Deposito was the first Italian organization to make and sell multiples (see those by Eugenio Carmi among his works), small-scale sculptures produced in large numbers — so they could be sold at affordable prices — and marketed through a monthly bulletin published in Italian and English that was sent to museums and art galleries all over the world, as well as to artists, critics and other cultural figures. For a period of time the multiples were also sold in department stores, both in Italy (at the Rinascente) and elsewhere, so as to reach a more varied public and allow art to enter their everyday lives. The Galleria del Deposito’s multiples soon arrived also in the United States, where they were distributed by its representative there, Eugenia Butler of Los Angeles. With the same philosophy that inspired his work at Italsider, Carmi involved many exponents of the contemporary art scene in this project, as well as international cultural figures who felt close to the group’s spirit and, over the years, the number of members of the cooperative increased, as did that of external artists collaborating with it. With regard to the multiples — which were, in any case, exclusively works of art — the Galleria del Deposito also produced scarves, enamelled steel trays and graphic works signed by the artists. In these cases, too, it was neither the materials nor the design that gave the objects their value, but simply the reproduction of the two-dimensional work specially made by the artists, who also planned the way the colours covered the simple mass-produced object forming its starting-point. The screen prints that Carmi entrusted to the Yugoslav screen printer Brano Horvat, were not yet regarded as works of art as such, although they, too, allowed the propagation of a form of multiple art, in this case characterized by strong, dense colours. The Galleria del Deposito, which was contemporary with similar pioneering initiatives in other countries — the Mec art group and the Galerie Denise René in Paris, Daniel Spoerri’s Editions MAT in Paris, Editions Alecto in London and Multiples Inc in New York — also participated in 1968 in the exhibition Ars Multiplicata at the Wallraf-Richartz-Museum in Cologne.